“A Walk Among The Tombstones” could’ve been Liam Neeson’s revival, after a string of average films such as “Non Stop”, “Taken 2” and “A Million Ways To Die In The West”. Alas, this movie was incredibly dull, void of tension and emotion, and failed to take advantage of a potentially interesting premise. The actors seemed indifferent most of the time, and there were no performances worthy of the tone that this film needed to achieve. As a result, the audience were left bored and restless, and I doubt that anyone actually enjoyed what was happening on screen. The movie promised some sort of menace or a twist, ready to save the rest of the film from mediocrity, and yet it never came.

The story is one of potential intrigue, as a former detective Matt Scudder (a recovering alcoholic) attempted to track down the killers of a heroin trafficker’s wife. As he delved into the underworld of New York City, he sought information, leading him to meet other drug traffickers that had been crossed by the murderers and also form a friendship with TJ (Brian “Astro” Bradley), a young man suffering from sickle-cell anaemia. There are plenty of ways that you can keep this story interesting, and as I watched the film I felt that it had the bare bones of a good movie within its 113 minutes. However, “A Walk Among The Tombstones” is just that; we watch as Liam Neeson walks around the bleak streets of New York, hoping that one of his many conversations will be interesting enough to liven up the film, but that never happens, meaning that the movie belongs in a cemetery just as much as its unfortunate female victims.

A sense of mystery lurks behind on-screen events for large parts of the movie, and I did wonder what the writers had up their sleeves as the film tip-toed towards a potentially interesting climax. Sadly, the most puzzling thing about this movie is how on Earth the filmmakers managed to make it so boring. 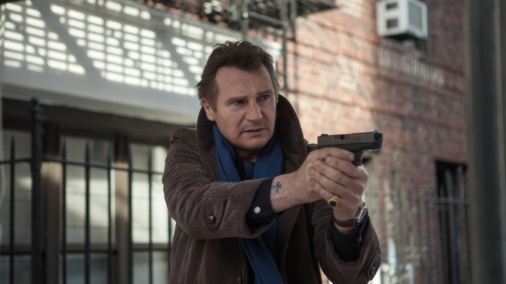 Nothing surprising happens in “A Walk Among The Tombstones”; none of the shifty customers that Scudder interrogates are even remotely remarkable, and none of them put up much of a fight, against an ageing man with little authority. I don’t believe for a second that this private investigator would have so much luck as he skulked around dangerous backstreets and questioned innocent shop owners, nor do I believe that he would offer any sense of intimidation. There were a few sinister moments in this film which offered a small sense of shock, but they were gruesome for the sake of being gruesome, which is far less interesting than when horrific scenes actually have some sort of purpose, or offer social commentary.

The best sequence in “A Walk Among The Tombstones” unfolds as a background to the opening credits, as we see a blonde woman lying on her back, and a man’s hand caressing her body, only to discover that she is being tortured by the film’s villains. The scene was well shot and was visually impressive, and it also served to show that Albert and Ray (Adam David Thompson and David Harbour), the antagonists of the film, are vicious, murderous, rapists. I felt that this, along with the scene which came before it, was a clever way to start the movie, because we get to see both Scudder and his adversaries doing what they do best, and we get a feel for their characters.

The performances in this movie aren’t great, although none of them are laughable and I wouldn’t say that it was the acting which let this film down. Liam Neeson was average at best, which is a shame because we know that he can pull off this kind of performance after movies with a very similar tone and story, such as “Taken”. I feel that he wasn’t given a very good script to work with, as his character only gets into one meaningful scuffle in the film, and most of the time Scudder simply searches for clues and has conversations with some of New York’s more colourful characters. This isn’t a film in which Neeson can go around fighting bad guys and showing his strength, because Neeson and his adversaries only spend about 5 minutes on screen together. Neeson’s greatest attribute is his presence on screen, and I will admit that he seemed in charge of each situation, but that was mainly down to the fact that none of the people he came into contact with offered any resistance in giving up everything they knew.

Dan Stevens’ performance was very strange, because he carried a sort of the weirdness forward from “The Guest”, and seemed as though he wasn’t what he was made out to be. However, as the movie progressed you realised that actually there was nothing about this character that was hidden or out of the ordinary, which was a complete disappointment. There really wasn’t that much to his character, which is slightly odd when you consider that he was a heroin dealer out to avenge the murder of his wife. I’m not sure whether or not I should criticise his performance, because I really don’t know what the director was telling him to do, it seemed as though Stevens had been told to hold back his emotions, yet there was no real reason for that and as a result his scenes were very confusing. His character (Kenny Kristo) was determined to find the killers, but he showed no pain or distress at the fact that his wife had been killed so recently, when surely that feeling would still be extremely raw and heart-breaking.

David Harbour was very good as Ray, the main antagonist of this film; he brought a real sense of villainy to the movie, because he was doing such cruel and twisted things, and Harbour was able to show just how much the character enjoyed these acts. Furthermore, Harbour portrayed a sense of control and authority over the situation, whilst also being quite manic when he wasn’t getting what he wanted, which was enjoyable to watch because it showed that the character had more than one dimension and it didn’t feel as though I was simply watching an actor playing a character.

Despite the fact that the murderers in “A Walk Among The Tombstones” were sadistic, pragmatic and calculated, I felt that their plan was slightly misguided. They were blackmailing drug dealers for money, yet it was clear that their interest wasn’t in the cash, but rather in the killing. They could’ve had a far better time if they just kidnapped random women off the street, and probably avoided Liam Neeson! I’m sure that the book would’ve done a better job in explaining why Ray and Albert focused their efforts as they did, but the movie didn’t execute this well, and as a result the killer’s motives were slightly unclear. I feel that more time should’ve been spent developing the villains in this film, as Scudder and his compatriots were far less interesting than Ray, and if we had seen more horrific scenes involving the killers we would’ve felt more satisfaction as Scudder came closer and closer to taking them down.

There was no emotion in “A Walk Among The Tombstones”, which was a shame because this sort of movie really needs to create a sense of tension and a hatred of the antagonists. There were moments in which things were happening to people, particularly Leila Alvarez (Laura Birn), which were truly disturbing, but nobody seemed to care. It was as if the supporting cast weren’t important enough to warrant emotion, and all the key dialogue and screen time had to be given to Liam Neeson. But even he didn’t seem to be angry enough as he came face to face with these monsters, and he definitely didn’t take enough joy in confronting them head on.

The score was quite good, and it kept you slightly interested as Liam Neeson took much of the screen time walking around and looking frustrated. It added a sense of mystery, playing behind Scudder as he looked into the distance or followed a target. On the other hand, there were other moments in this film at which I felt that music was used inappropriately, particularly as Ray set his sights on making a young girl, Lucia (Danielle Rose Russell), his latest victim. The scene in which that was revealed wasn’t particularly bad, but the music which played as Ray stared at the teenager wasn’t really required, and sometimes silence and a good performance is enough to make a scene truly memorable.

I also spotted a few errors in filming which meant that I was never truly immersed in this movie, particularly the fact that Dan Stevens’ facial hair changed from scene to scene, yet in the film only minutes had passed. That kind of mistake is just unacceptable, and I can’t understand how an editor didn’t notice that and make sure it didn’t tarnish the film. After the movie I asked the three people I went to the cinema with whether or not they noticed it, and they all said that they did, so I can’t accept that it was a small error. There was also a lot of moments in which the dialogue fell flat, just at the point when it seemed as though things might get interesting and some sort of twist might be revealed, which was just strange to watch. Scudder would talk to Kenny or TJ and bring up his past, and then he would simply stop talking before the conversation actually got interesting. There didn’t seem to be any reason for this, and I don’t understand why these scenes weren’t cut from the film to take away from the excessive run time. 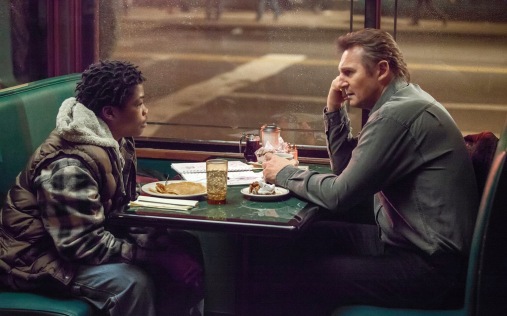 There were also elements of “A Walk Among The Tombstones” which seemed completely unnecessary, particularly the fact that Scudder was a recovering alcoholic, or that TJ had sickle-cell anaemia. TJ never seemed integral to the movie in the first place, and he wasn’t much use to Scudder as an ally, so wasting time on his story just took the whole audience out of the film. Scudder’s alcoholism was a key set up for why he became a private investigator, and therefore it was important in bringing him to his meeting with Kenny, but apart from that it didn’t have a clear role in the movie and was referenced far too often.

There aren’t many positives in “A Walk Among The Tombstones”, as no actors stand out, and nothing really interesting happens in what was an extremely dull film. There is nothing about this movie which warrants extreme criticism, but as a whole the movie is never enjoyable, so it really isn’t worth watching. I wouldn’t recommend it, and it’s definitely not one to see at the cinema. The most disappointing thing about “A Walk Among The Tombstones” is the fact that it does so little with its storyline and its cast. I am a fan of Liam Neeson and Dan Stevens when they are at their best, and I was hopeful to see them play off one another in a seemingly interesting story. However, this movie would rather take the audience on a tour of New York City than actually develop on its premise or its characters, and for that reason it is one of the worst that 2014 has had to offer.