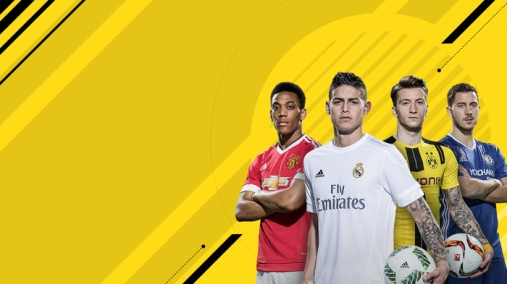 “Fifa 17” is a frustrating game. The first time you play it it feels completely alien – it doesn’t feel responsive and the systems in place feel clumsy. Passes go array, shots fly wide, and you can’t win a header to save your life. However, once you become accustomed to the way that the game plays you will find it more entertaining, even if your ability to adapt to its quirks doesn’t necessarily paper over the cracks. There are too many inputs to hide the fact that the game’s design is shoddy, which is epitomised by the awful addition of a new physical play system, but if you stick with the game it does eventually become palatable.

The most talked about addition to this year’s game is The Journey, which basically acts as a polished Be A Pro mode. I have to say that this is the best thing that EA have added to their game in a long time, even if it isn’t perfect, and I liked it a lot for what it was worth.

The dialogue in The Journey verged on ridiculous and the options you were able to choose between in interviews and interactions were both limited and unclear, but playing as an established character makes your performances feel important and creates a degree of emotional investment. This enhances the gameplay for the better whilst playing as Alex Hunter because you concentrate on decision making and play more precisely, but it also makes the game’s shortcomings even more apparent, because when passes map to the wrong teammates or dribbling is too rigid you feel like you’re being penalised by the game for something that isn’t your fault.

This occurs often when playing The Journey. The game constantly punishes you for its own shortcomings, and more often than not you’ll find yourself making an intelligent run or asking for a simple pass into your feet only for a teammate to give away the ball, and then to compound your frustration when your teammate makes a mistake it will be you who gets scolded for asking for the ball in the first place! You’ll also have goals taken away from your name due to a slight deflection from a defender, and assists abolished because someone stole the ball from you rather than you actually pressing A to pass the ball on, which makes your efforts to get into good positions feel futile. All of these idiotic gameplay features make what should be a great mode something much less than it could’ve been, and they leave you feeling annoyed far more often than you should when engaging in a leisure activity. Another issue with The Journey is that whilst it’s good, there isn’t a lot of content there. It masquerades as a story mode, but in actual fact the cut scenes in the game are both poorly written and few and far between. The ones that are there are repeated various times in different guises, and the way that the characters deliver dialogue makes it clear that the actors were reading lines in a studio rather than actually engaging in conversation. This is a shame because there was the opportunity to do something more with the mode; although I’m hopeful that in future they’ll perfect the formula and therefore improve their game.

This feeling of missed opportunity is furthered by the fact that The Journey only lasts for one season, and that you aren’t afforded the opportunity to carry on playing as Hunter in a normal Be A Pro season mode once the end credits roll. This was disappointing for me as I wanted to take Hunter to the top, but because I have a strange sense of humour I chose to start my journey with Bournemouth. This meant that I never had a chance of winning the league title because despite scoring 40+ goals we slumped to 14th before I was recalled from my short-term loan. Moving on from The Journey; the game itself is slightly messy. It doesn’t play as well as the previous game and it isn’t as fun either, with everything feeling very rigid and forced. It isn’t a game that encourages creativity, instead it asks you to learn the issues with its design and exploit them so that the numbers at the top of the screen favour your side over the AI’s at the end of 90 minutes. This isn’t what a game should be in my view, and I worry that EA misses the point each year whilst also professing that their goal is to allow players to ‘feel the game’.

When playing “PES 2017” it’s obvious that you aren’t playing a football simulator – the tackles that you put in are more akin to assault than they are to the challenges that are permitted in the modern game – but it’s a lot of fun and it feels as though it was designed by passionate fans of the sport rather than a committee of suits trying to tick boxes. The same can’t be said for “Fifa 17”, so whilst I don’t really dislike it I do find myself stopping every now and again when I’m hit by the soullessness of its gameplay. I play it for the same reason that I play games like Candy Crush and Angry Birds – because it’s repetitive and it gives me false rewards for success, like coins in Ultimate Team or stats in The Journey. 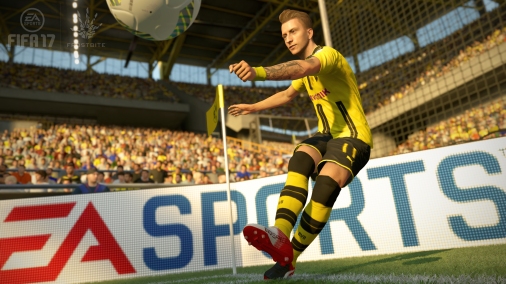 With this in mind, I don’t want to analyse every aspect of the gameplay in “Fifa 17”. I don’t want to be excessive in comparing it to “PES 2017” either – it isn’t as good as the competition, and that’s all I need to say. It just isn’t a great game, and to be fair the franchise has been floundering for years. The Journey is the only aspect of the game that’s genuinely worth talking about, but it isn’t executed well enough to save the rest of the game from the mediocrity that its designers have condemned it to.