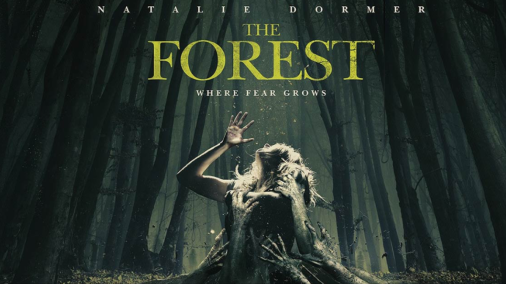 “The Forest” is an American horror movie from first-time director Jason Zada; starring Natalie Dormer in a dual role.

Dormer, (of “The Tudors” and “Game of Thrones”), plays sisters Sara and Jess, who have what the film explains as a kind of psychophysical relationship due to the fact that they are twins. In other words, they can tell through some cosmic force that the other person is in trouble (next they’ll have us believe that they can feel trivial things like their sibling’s bowel movements). As an identical twin myself, I can say with complete confidence that this crucial detail of the plot is utter bullshit – twins are people like everyone else, they just so happen to have shared a womb for nine months and have the same birthday.

Sara propels the plot forward, as she learns that her sister has disappeared after entering the Aokigahara forest in Japan, infamously known as the Suicide Forest. The forest has a notorious association with suicide, as multiple bodies are found each year inside the 35-square-kilometre sea of trees, which obviously makes her feel quite worried. For a variety of reasons, she decides to fly to Japan to search for Jess, and then proceeds to do everything that the locals tell her not to; including staying in the forest overnight, and leaving the beaten track. 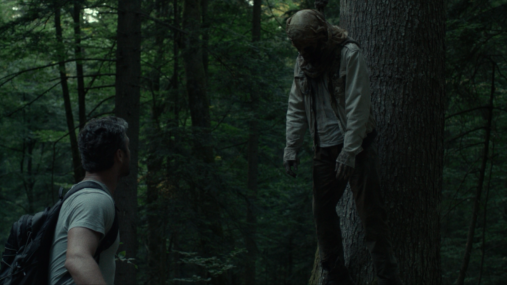 Supposedly, David Goyer (attached as a producer on this film) came up with the premise after reading a Wikipedia article about the forest, (which is quite novel because I got that fact from the same source – sorry, not sorry). This perhaps explains the level of quality that the story aspires to; it was born from what was most likely a visit to the toilet and it probably should’ve stayed there.

Having said that, I am a horror movie enthusiast, so I still managed to get a degree of enjoyment from the film – it wasn’t perfect by any means, but it did have a little bit more going for it than the majority of modern day horror films.

For a start, I actually thought that the direction was pretty decent. Zada managed to capture the sense of beauty that the setting evokes, (although this movie was filmed in Serbia, not Japan), and he contrasted this nicely with the darkness of the story. I think that with the right script and a bit more help, Zada could’ve shot an impressive picture, because oftentimes the lighting and framing were well-conceived and considered, especially for a horror flick. 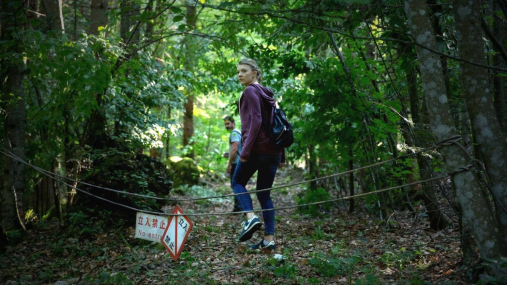 The camera would focus squarely on Dormer as she made her way through the forest, and as it did so things would become ominously quiet, with the rest of the screen becoming a blur of brown and green. This worked well, as it narrowed things in on Sara’s perspective – which was important because she was the film’s focal point, and she was slowly being consumed by the voices on the wind – and it also left the audience searching the background for a figure lurking in the distance. In this way, Zada was able to use the audience’s imagination against them in order to generate tension, rather than having a jump scare interrupt the atmosphere every two minutes.

These moments were intelligent, and I appreciated the attempts that were made to limit the number of actual scares, but this also speaks to the limitations of the script. The story left Zada with very little to play with, because whilst he did his best to make the film scary without excessive action, the yūrei (this film’s take on ghosts – spirits who have died in violent ways or whilst feeling a powerful emotion) didn’t interact with Sara, and as such they couldn’t actually appear in the aforementioned background. The only way that fear could be evoked by something happening on screen was through a dream sequence, or during a scene where we effectively watched through Sara’s eyes, and as such the jump scares were easily telegraphed.

This might not have been a problem had Zada placed a greater emphasis on Sara’s fragile mental state, but her vulnerability was underdeveloped and neglected, often in favour of cheap scares. I don’t think that this was something that Zada intended to happen, because the film does feel as though it aspires to be something more than a generic horror movie, I just think that he genuinely didn’t know how to make the film scary without having a CGI jump scare every so often. 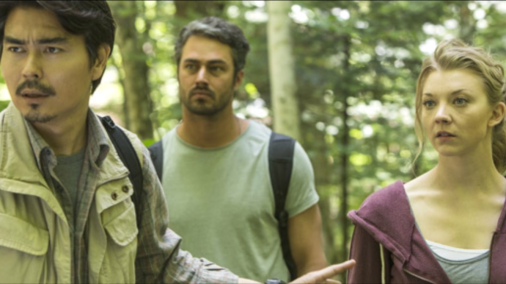 One way that Zada could’ve generated a tenser atmosphere without resorting to lacklustre jump scares was by understanding the value of silence – after all, the world is a scary enough place without having a threatening soundtrack whispering in the background. In reality, the forest would’ve been populated by a variety of creatures, both large and small, and these creatures would’ve played a much more unsettling tune than anything created in a sound booth. Sounds carried by the wind are much more menacing in real life when there isn’t any music to accompany them, so why shouldn’t the same apply in films? Artificial sounds merely act as a stimuli for the audience to tell them that something nasty is about to happen, which breaks immersion and allows us to prepare, thus lessening any impact that true horror can have.

Another area in which “The Forest” lets itself down is its character development, as only Sara is afforded any real depth, and even that is painfully thin. Natalie Dormer does her best to bring the character to life, but any depth that she might’ve had is lost as her psychological torment is treated as an afterthought, rather than something which moulds her personality.

She has an even rougher time trying to make Jess anything more than a plot device, as she has no time to infuse the character with a persona. She does what she can, but the only major difference between the sisters is that they choose a different brand of hair dye. This is a huge shame, as Jess’ disappearance is the catalyst for the entire plot, and as such it makes sense that we should care about her fate in some minimalistic way. Alas, I don’t think anybody in the audience actually did, which made the ending that little bit harder to swallow. 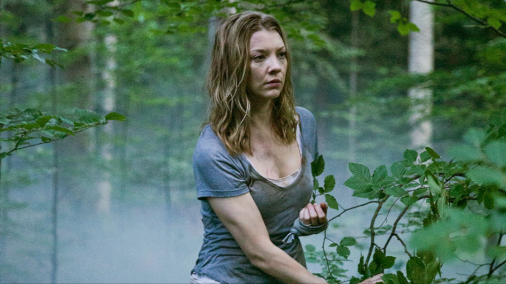 Taylor Kinney’s performance is similarly hampered by poor writing, as his character (Aiden) is painfully inconsistent and once again underdeveloped. His motivations are ridiculously opaque, as we have no way of knowing whether or not he wanted to have sex with Sara, to genuinely help her in her search, or just to write a good story. This might seem like an intentional aspect of the script, (given the fact that Aiden is supposed to be a potential villain), but whether or not this is the case becomes irrelevant by the end of the film, because the audience is still none the wiser. He was simply a plot device to create a sense of tension, rather than a fully-realised character with purpose and intention.

Finally, even if all of these issues didn’t appear in “The Forest”, it still wouldn’t be a good movie. Why, you ask? Well, because “The Forest” makes a cardinal sin… it isn’t scary. At no point does a jump scare have the desired effect, and the tension that Zada tries to build wavers when horror-movie-logic takes you straight out of the film. It just doesn’t do the thing that it is designed to do, so no matter how many redeeming factors it has, I can’t recommend it.

“The Forest” is a mediocre movie that fails to capitalise on an interesting premise. The writing is woeful, and the performances aren’t good enough to keep you interested when the scares miss their mark. At the end of the day, this movie actually makes you want to visit the Suicide Forest, rather than avoid it, which shows just how much it fails at its one and only job.