“Straight Outta Compton” is one of those films that seems to come out of nowhere. I hadn’t heard much about it prior to release, but with nothing else out there taking my fancy I decided to give it a watch. I’m glad I did, because from the moment that the film opens with the words ‘you are now about to witness the strength of street knowledge’, (which also opens the N.W.A’s first album), “Straight Outta Compton” is a pulse pounding ride, propelled forward by a real life story of struggle and success and how these two states bring about the other. Although it is slightly excessive in length, this doesn’t take away from the quality of the movie and in fact serves to show that these people have lived interesting and eventful lives.

The film is a biopic which focuses on the N.W.A and their rise to fame, with a particular focus on Dr. Dre, aka Andre Young (played by Corey Hawkins), Ice Cube, aka O’Shea Jackson (played by O’Shea Jackson Jr.), and Eazy-E, aka Eric Wright (played by Jason Mitchell).

It’s a story about raw talent and having the guts to use it to alter your situation, as well as the adversity which accompanies ambition, as success changes each character and inevitably people attempt to keep them in their place. I really enjoyed how the songs that the group were writing linked to events in their lives, because that made their music feel that little bit more important. Songs like ‘Fuck Tha Police’ followed events in which the group had experienced police brutality and typecasting, which allowed the audience to gain an understanding of what the characters were feeling. This created a connection with the characters and the audience, which in turn made the film more immersive. 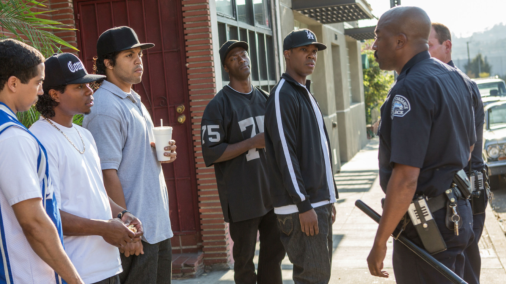 Prior to watching this film my knowledge of the N.W.A and their music was pretty limited, which I think made the movie all the more enthralling from my perspective. To me Dr. Dre is just the guy who made Eminem famous, and Ice Cube is the leading man from films like “Are We There Yet?”, so to find out that these men stood for something and had to earn their fame was really fascinating. Their story is larger than life and at times it is so farfetched that it wouldn’t seem credible in a work of fiction, so it’s hard not to get sucked in and route for these kids with their heads in the stars.

I can understand why some people think that the film promotes misogyny, because women are peripheral figures in the movie and the N.W.A don’t treat them with much respect, and it is true that the movie glosses over some of the group’s more unfavourable moments, but that was always going to be the case given who produced the film. I actually think that the movie is refreshingly honest in its approach considering that Dr. Dre and Ice Cube are producers, because no one member of the group is made to seem completely innocent and they are all clearly flawed. They carry guns, threaten people, take drugs, and its insinuated that they have done worse. Of course, these aspects of the group’s life are at times glamourized because sex and drugs sell, but it doesn’t always paint these life choices as positive, which is pretty obvious when you consider where some of the characters end up.

The cast is made up of relative unknowns such as Corey Hawkins and Jason Mitchell, but not once did I feel taken out of the film because of a bad lead performance. The actors playing the N.W.A applied themselves brilliantly and their chemistry on screen was what made the movie what it was. O’Shea Jackson Jr.’s resemblance to his father is uncanny, not only in his facial features but also in his mannerisms. Seeing short snippets of real life footage during the end credits makes that fact abundantly clear, and it really heightened the authenticity of the film. I thought he was excellent throughout and extremely believable in the role.

My only issue with the cast would be the performance of Paul Giamatti as Jerry Heller, because although Giamatti isn’t terrible he felt slightly out of place given the fact that he’s a very recognisable actor with a distinct personality on screen. In a sea of believable performances his felt more like a parody of a character than anything else, and this wasn’t helped by the fact that when the film tried to give the character depth it came off as odd rather than sincere. His earnest moments felt neither backhanded nor genuine, falling somewhere in the middle and leaving the character seeming confused, particularly when he showed disgust at the behaviour of the police while they searched the N.W.A without cause. 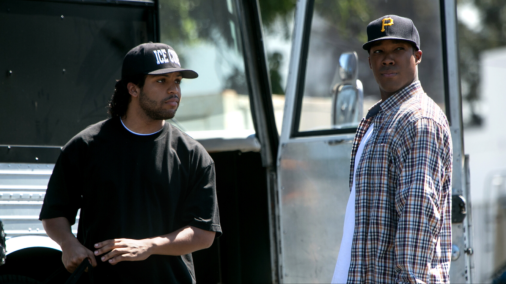 My biggest issue with the film was probably the way that it ended, because I didn’t feel as though it had a clear final act – (SPOILER ALERT) the film simply petered out after the death of Eazy-E. It’s not that this wasn’t a reasonable ending for the film, because Eazy-E’s death meant the true end of the N.W.A given that it had forever lost a key member, but the way that the film carried on for a few minutes and then finished was a bit peculiar. I felt that the movie would’ve been better off finishing with some sort of news story montage (as it did when the credits rolled), however cliché that may be, rather than with Dr. Dre leaving Death Row Records, because that would’ve wrapped everything up nicely.

Having said all this it would be easy to forget to mention exactly how I feel about the film, because I want to be critical and make issues with the film explicit rather than just saying ‘I really liked this movie’. However, I want to make sure that this time around I make it clear that this is a very good movie that I genuinely enjoyed. It isn’t perfect and the accuracy of events is probably questionable at certain points, given the fact that Dr. Dre and Ice Cube don’t want their names to be tarnished by a film that is essentially made to glorify their careers, but that doesn’t mean that it isn’t an excellent film to watch. The music marries with the narrative amazingly and the troubles that the characters face offer the film a human feel despite the larger than life nature of the N.W.A; on top of that the performances are great and the rags-to-riches story is truly compelling.

“Straight Outta Compton” is a fantastic film whether you are a fan of the group or not. Moving at a relentless pace and covering a ten year timespan it makes an incredible impression, and I would highly recommend that you see it in a cinema while you can.